Calling on Carole: Confessions of a Panster 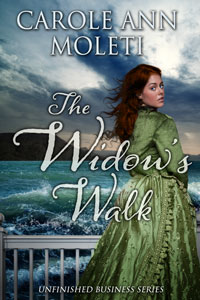 Mike and Liz Keeny are newlyweds, new parents, and the proprietors of the Barrett Inn, an 1875 Victorian on Cape Cod, which just happens to be haunted. By their own ghosts. The Inn had become an annex of Purgatory, putting Mike, Liz, and their infant son in danger. Selling the historic seaside bed and breakfast was the only answer, one that Liz and her own tortured specter refused to consider. Were they doomed to follow the same path that led to disaster in their previous lives? Was getting out, getting away, enough?

Greetings to all on the occasion of my first post the Soulmate Publishing Authors’ Blog. Carole Ann distinguishes me from my mother, but most people call me Carole. Over the next few months you’ll get to know a lot more about me but today I decided to focus on a very exciting tenth anniversary. Not my wedding anniversary; my husband and I will soon be married a staggering twenty-five years. Rather, in 2005 I began the journey to become a creative writer, which as any of us can attest, is a long and tortuous one with no guarantee of success. That was a strange notion since my whole life was spent working toward the goal to become a nurse and then a midwife. Equally torturous, but at the end there is licensure and certification and a well paying, albeit stressful and exhausting job.

For creative writers, there are no guarantees and a very different kind of stress and exhaustion, no credentials, and very little, if any, pay. I always wrote: bad poetry, letters to the editor, academic articles and papers, book chapters, and even a dissertation. (Yes, this Dr. Moleti is a nurse) Boring, tedious work, and peer reviewers are most often far from charitable and encouraging and seek to wipe any shred of creativity and free thought off the page in the pursuit of scholarly excellence. I might be an academic but  resisted anything that removed the joy of imagination and the wonder of the ‘what if” until I discovered a much better outlet for my restless spirits. And I was well prepared for the fiction editing process, which is much different, with respect for the author’s intent, style, and voice.

Academic writing had me to the point of not even wanting to pen a shopping list. Until one day when I watched a movie and became so incensed by the glorification of intimate partner violence that I decided to write a novel to put things right. That is another very long story, but suffice it to say I wrote fan fiction with abandon. Until I got to chapter seven and realized I didn’t have a clue what I was doing. Fortunately, Gotham Writer’s Workshop is based in New York City and their course catalogs are on every corner. They taught me the basics and dozens of online and immersion workshops later, I continue writing about whatever idea springs into my head or sight passes before my eyes, or whatever drama unfolds in an ER cubicle, subway car, or one of the mean streets I walk every day.

More about my writing can be found here, but I must get back to unfinished business. The story idea came to me while opening up a summer cottage, pulling dust covers off furniture and vacuuming up dead flies. I had the sudden inspiration to write a story about a woman who finds a trunk of old clothes and learns sad truths about the person who they once belonged to. It was a quick hop from that to a ghost story—and from barbecues and parades over the Fourth of July weekend in upstate New York immersion in a paranormal fantasy set on Cape Cod, where I have spent many happy times with family and friends over the years. The series combines my love of the beach and boats with a fascination about paranormal activities, and how past life experiences may influence our fears, fantasies, and choices.

In 2006, I started submitting short stories and creative non fiction to agents and editors, My first novel and a second-both science fiction-are in a virtual trunk, but I do intend to pull them our and salvage whatever I can of them. But I’m way too busy now working on the Unfinished Business series, which has found its home at Soulmate.

The second book in the series, The Widow’s Walk, was published in 2014. The prequel, Breakwater Beach, will be published in late 2015 or early 2016. I am now working on the third. So, why was the second published before the first? Well, because I am a pantser, the moniker of those who take a story idea and run with it, often in circles and figure eights, before they discover what direction the characters are going to take on their journey which, unlike nonfiction and memoir, is not the same one the writer is planning to take.

Always a rebel, I cannot plan out a story though over the years editorial necessity has compelled me to do some rudimentary plotting, which consists of figuring out the beginning, middle and end and a few interesting stops along the way. That route, for Breakwater Beach, meant taking one of my first short stories, which turned out to be the middle of the series at the juncture of the characters’ past and present lifetimes, and writing backwards and forwards. I never expected it would take three volumes (and ten years). Like the characters, I was overwhelmed by the emotional impact of the discoveries along the way.

During my writer’s journey I have made many writing friends like the Specfiction Fledglings Group, Deborah Blake and The Creativity Cauldron, and the members, past and present, of the Professional Author’s Group and Connecticut Romance Writers of America. Some of them have read and offered advice on every single version of both Breakwater Beach and The Widow’s Walk. Rayne Hall, editor and moderator of the Professional Author’s Group, included the short version of Breakwater Beach in Haunted: Ten Tales of Ghosts. I am delighted to now be a part of the vibrant and generous Soulmate Author’s Group, many of whom will be gathering this July at the National Conference of the  Romance Writers of America in my hometown, New York City.

So, thanks for listening to the confessions of this hopeless pantser. Read excerpts of both books on my website. Share the development of The Unfinished Business series by subscribing to my newsletter and I will send you a free download of Haunted so you can get a preview of Breakwater Beach the novel along with nine other great ghost stories. And as a bonus, join the Novel Fun In The Summer Sun book tour, and download The Widow’s Walk for 99 cents from July 25-29. Of course, if you happen to be on Cape Cod, in the very place where the Unfinished Business Series is set, stop by and meet me in person at one of the events, at the beach,  morning yoga, or the local clam shacks in Brewster, Orleans, and Chatham. I’ll be back here in August, but I’d love to hear your questions and comments right now.

Carole Ann Moleti is a nurse-midwife in New York City, thus explaining her fascination with paranormal and urban fantasy that infuses everything she writes. The Widow’s Walk is her newest fiction. Excerpts from her urban fantasy novels have appeared in several of the Ten Tales anthologies. Segments of Carole’s memoirs, Someday I’m Going to Write a Book: Diary of an Urban Missionary and Karma, Kickbacks, and Kids range from the sweet and inspirational to the edgy and irreverent. Check out her Amazon Author Page and connect with Carole on Facebook, Twitter, Goodreads, or Google +

Nurse Practitioner, Nurse Midwife, Mother. Writes fantasy because walking through walls is easier than running into them. Writes political commentary, memoir and creative nonfiction because....I am not a well behaved woman.
View all posts by caroleannmoleti →
This entry was posted in Calling On Carole! and tagged Breakwater Beach, Carole Ann Moleti, Paranormal Romance, Soulmate Publishing. The Widow's Walk, The Unfinished Business Series. Bookmark the permalink.

4 Responses to Calling on Carole: Confessions of a Panster