Putting the “Co” in Co-Editing, by Char Chaffin and Cheryl Yeko

Anyone who co-works a project with someone knows there are rewards as well as problems in the process. Differing opinions, opposing work ethic, power struggles, etc., those stumbling blocks are all real and frustrating. On the reward side: satisfaction for a job well-done, an improved attitude toward creativity in general, and stronger personal/professional relationships that result from co-working. 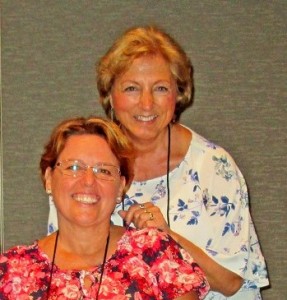 It’s the same when editors co-edit together. Fellow senior editors and BFFs Char Chaffin and Cheryl Yeko found that out, when a vague idea for a year-long, multi-author project came together over months of plotting and planning. Once they gathered up their ‘stable’ of authors, set project parameters, and the stories started rolling in, the work began.

Here’s what they both learned, in the process.

CHERYL:  What’s it like to co-edit a series for a publishing house? Well, in a nutshell, I love it. I believe the stories are better served since each editor brings their own special skills to the project. I’m not sure how the authors feel about it, because they get double the work, and I’m sure we drive them a little bit crazy. But no one’s complained so far!

CHAR:  I figure some authors might see the advantage of having two sets of editing eyes on their work. Authors miss things during the revision process, and so do editors; it’s inevitable. But the fresh eyes of one editor can take up the slack from another and see places where something—often small—might have been overlooked. Win-win for the author!

CHERYL:  For example, here’s how it’s working for me and Char on The Soul Mate Tree project. When planning the series, we initially split up the editing duties according to genre preference, and whether we were editors for a project author in the past. However, when we began working with the manuscripts, for one reason or another, we ended up passing the stories back and forth, making edits and suggestions to each one, until we were both happy with the outcome. This worked very well, and the books are better for it.

CHAR:  The Soul Mate Tree Series was the perfect venue for us to see if we blended together solidly as co-editors. Each of us brings something different to the revision and developmental process. We each have our strengths, so it’s been a learning process as well.

CHERYL:  It helps that Char and I write together as authors, and that is also how we work on our manuscripts. We make a great team! We hope to bring many more great Soul Mate Publishing projects to our readers.

CHAR:  In fact, our second Soul Mate project is in the works, with a tentative release schedule of January, 2020. This time we’re going after the elusive Paranormal Trilogy, a most splendid creature. ::grin:: There will be more discussion and idea revelation as we progress in the planning stages, but once again we’ll be working with Soul Mate authors to create a year-long book release effort.

Co-editing isn’t for everyone, any more than co-writing is. When Char and Cheryl started co-writing, they never imagined what they’d learned could spill over into the editing process. One big thing they figured out: compromise and cooperation is key, whether they edit the pen or wield it.

Work? Yes, indeed. Satisfaction for the end product? Definitely. Differing opinions, and all those other things? Well, sure.

Fun? Oh, YES. And that makes everything else so worthwhile.

Char Chaffin and Cheryl Yeko are Senior Acquiring Editors for Soul Mate Publishing, as well as multi-published authors writing solo and also under the pen name of CiCi Cordelia. They can be found buried beneath a mountain of tasks, projects, and other writerly and editor-ly stuff, in their respective geographical locations and pretty much everywhere the Internet goes.

Want to find them? Start here, with CiCi Cordelia:  https://ccromance.com/

Individually they can be found here:

2 Responses to Putting the “Co” in Co-Editing, by Char Chaffin and Cheryl Yeko