Once a month, I get together with a group of local writers to talk shop over coffee. It’s a great group of people of various backgrounds, various writing experience, and various genres. We exchange our knowledge of the craft, encourage each other through difficulties and challenges, and celebrate our triumphs. Mostly, we reaffirm that we’re not as crazy as our friends and families think . . . we’re writers!

Recently, one of my fellow writers asked me about researching for a story and how to know when enough is enough. Hmm. Is there ever

really enough? I mean, I’m the kid that spent hours and hours roaming my local library looking up all sorts of information, getting lost in the rabbit hole of research just for fun. When I couldn’t go to the library, I’d scavenge through my parents’ encyclopedia set (this was before a thing called the internet came around). I am now known among family and friends as the Google Queen. I’m not sure I’m at all qualified to answer my friend’s question. Lol!

But most writers, whether they love research or hate it, find it necessary at some point during the writing process. Keeping it focused, organized, and under your control is key to not getting lost in it. So, here are a few tips I’ve learned along the way.

Recognize that going down the rabbit hole of research can be an important part of the plotting process. I always allow at least some time to get caught up in a maze of research before I start writing a novel. (For the record, I’m part plotter and part pantser). You can find all sorts of fun and interesting things to include that you may never have known existed. You might also discover information that will ultimately become a foundation for your story.

For example, as I was developing the story idea of Fool’s Gold, I knew it would be set during the California Gold Rush. Everything I had ever learned about this time period involved wagon trains heading west over the untamed land that would eventually become the United States. However, my heroine wouldn’t be going to California. She needed to return from California to Louisiana. In researching the overland trails, I learned about the route through the Isthmus of Panama. Sending my characters on this path, set the stage for the rest of the plot to unfold.

Don’t allow research to become your excuse to procrastinate. If you’re writing a historical romance set in Elizabethan London, you probably don’t need to be researching the Prohibition in the United States. If you’re writing a contemporary western romance, you probably don’t need to be researching the ancient culture of the Huns. Things like this tend to be a red flag that you’re procrastinating . . . not researching. If you find yourself looking up things that have nothing to do with your story . . . stop! Slowly, step away from the internet and don’t look back.

Once you start writing, try not to stop for research. I know, sometimes, it’s unavoidable. One of the writers in the above mentioned group, has a scene where a pressure cooker explodes. The amount of damage that explosion would cause and whether or not it could blow out the windows affects how her story moves forward. This would be a time a writer should probably stop and find the answers. Usually, though, you can make a quick notation . . . highlight the section, add a comment in the margins, or use some other mark on the manuscript to allow you to come back to it, and then just keep writing. You don’t necessarily need to interrupt your muse to find out what kind of buttons would be on the hero’s overcoat or if the tree outside the heroine’s window should be an oak or a spruce.

When you do go back to research the areas you marked, be efficient about it. Make a list of everything you need to look up. Decide how important it is to the overall story, keeping in mind that sometimes small things enrich a story in large ways. Maybe it doesn’t matter if the tree is an oak or a spruce, but adding that detail rather than just mentioning a generic tree definitely adds to the picture you’re painting in the readers mind.

Don’t be afraid to contact an expert. It’s often the quickest way to get the most accurate information. Before I decided to write historicals, I had a romantic suspense percolating in my mind. It involved a missing persons case, but the only knowledge I had of police investigating a missing person came from movies, TV shows, and novels. So, I called the local police department. I explained who I was and why I was calling. Within a few hours, I received a call back from a detective who was very helpful and willing to answer all of my questions. I’ve also contacted museums, libraries, and university professors, and I have never once encountered an expert reluctant to talk to me.

Do you have any research tips or advice?

You can find Cari Davis at any of the links below: 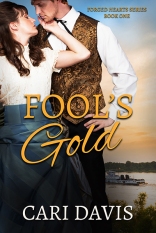