A Story Fit for a Novel by Rebecca Heflin

As writers, we dream up stories, create characters, and in some cases, settings or whole worlds. We let our imagination play “what if” and spin out our tales for the pleasure of our readers, never expecting our life to become the stuff of fiction. Last month, mine did.

In the space of less than a week, I experienced one of the most remarkable, emotional, and surprising events in my life. After all, how often do you find out you have a half-sister? You read it right–a half-sister!

There had always been a family myth that my late father had a daughter from an extramarital affair, and thanks to the magic of DNA, that story proved true.

Several years ago I submitted my DNA to Ancestry to help me trace my family history–primarily to confirm what most of the records already showed, that I am mostly British, Scottish, and Irish, never thinking that years later the test would link me to someone categorized as “close family.”

It had been quite some time since I’d logged into Ancestry. I love it, but it also becomes a huge time-suck. I login thinking I’ll just follow up on a couple of “leaves” and the next thing I know it’s three hours later. But, on a Tuesday evening last month, I decided to check out Ancestry’s “new and improved” DNA information, never expecting to find both a “close family” match and a message from said match.

As for the DNA match, after a few hours of research, I discovered that based on the confidence score (extremely high), the degree of closeness of our DNA, and all other relevant information, it could only mean one thing: the match was my half-sibling.

As for the message, my match said she had been adopted at birth and had no identifiable information concerning her biological parents. Her birth date and location triggered all sorts of childhood memories, particularly meeting a “friend” of my father’s—a woman named Shirley.

Convinced at this point that she was, in fact, my mythical half-sister, I could at least give her half her family story. After contacting her and exchanging emails all day the next day, including an email telling her her father’s name for the first time ever, it became more and more apparent that we were related. And when she sent me a link to a column she writes (yes, she writes, like me!), and I saw her photo, I knew beyond a shadow of a doubt, because looking at her was like looking at my late father. 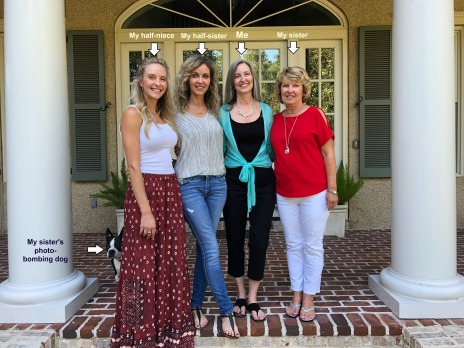 We had an emotional meeting the following Sunday, along with my other sister, and my half-sister’s older daughter. I now have a younger sister, and two nieces and a nephew I never knew I had. And she has, for the first time in her 48 years, a biological family, complete with siblings, nephews, and cousins. All in the space of less than a week. Pretty remarkable.

I couldn’t have written the story any better.

How about you? Have you ever had any “truth-is-stranger-than-fiction” moments?

I've dreamed of writing romantic fiction since I was fifteen and my older sister sneaked a copy of Kathleen Woodiwiss' Shanna to me and told me to read it. Now I write women's fiction and contemporary romance under the name Rebecca Heflin. In case you're wondering, Rebecca Heflin is an abbreviated version of my great-great grandmother's name: Sarah Anne Rebecca Heflin Apple Smith. Whew! And you wondered why I shortened it. When not passionately pursuing my dream, I am busy with my day-job at a large state university or running the non-profit cancer organization my husband and I founded. I'm a member of Romance Writers of America (RWA), Florida Romance Writers, RWA Contemporary Romance, Savvy Authors, and Florida Writers Association. My mountain-climbing husband and I live at sea level in sunny Florida.
View all posts by Rebecca Heflin →
This entry was posted in According to Rebecca, Soul Mate Publishing and tagged changes, fiction, life, relationships, technology. Bookmark the permalink.