More than a wee bit of Irish…

Margaret Mary Gallagher, my maternal grandmother, emigrated by steamship from Ireland to New York City in 1904 at the tender age of nineteen. Following her brother Stephin to a new life in a foreign country, I can’t imagine her horror when her anchor, her beloved sibling, died in a tragic accident shortly after her arrival. 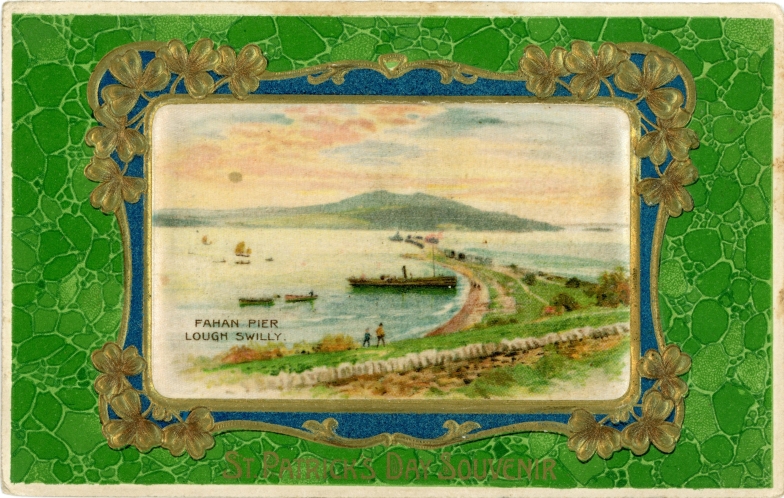 Did she return to Ireland? Not with her perseverance. She modeled at New York’s famed Wanamaker’s Department Store and worked as a domestic for the Gould family. The 1900 era Gould’s would be billionaires by today’s standards.

Fortunately, Jay Gould had died a decade earlier, as he’d been aptly titled the original ‘robber baron’ and most hated man in America from his shady business ethics during railroad development. I’d guess working in their household is how she ended up on the horse in the photo. Possibly at Hempsted House on Long Island?

These vintage, turn of the century postcards and photos survived Margaret’s moving between multiple rooming houses in New York, a homestead in North Dakota (where she began her day sweeping rattlesnakes off the sunny front porch), and the Great Depression hitting Saginaw, Michigan.

This beautiful, spirited Irish lass didn’t lack for dates during her time in New York. Men mailed a postcard designating when they’d be in town to secure a dinner or dancing date. I’ve put the foot high stack of cards in chronological order–many by, ahem, suitor. I love the card featuring an angelic girl fishing for hearts-the overall tone on most messages alludes to Margaret’s coquettish nature.

How I wish I’d have met my grandmother. She died from cancer in 1932, at age forty-seven, during the height of the depression. My mom was only ten and was raised by a father with a sixth grade education and her beloved half-sister, Shirley, Margaret’s daughter from a previous marriage. She kept a diary in later years-maybe where my writing gene originated. I’m determined to research more of her history and plan to write her story. It’ll be a romance with a happy ending, that’s what my mom would’ve wished. We’ve remained close to our Irish family–my husband met fifty-four of my Irish clan in a two day span during a past trip. Erin go Bragh-Ireland till the end of time.

Sign up for Sally’s newsletter at https://www.sallybrandle.com for a chance to win an ARC (advanced reader copy) of Torn by Vengeance.

3 Responses to More than a wee bit of Irish…