Back in the days of free-range childhood, I thrived on “let’s pretend.” We played Pioneers, Superheroes, the regrettable  Cowboys-and-Indians, and endless games of “House.” We were army brats and WWII was only a few years behind our families, so “War” occupied quite a bit of play. I was never a big fan of Princess but could be persuaded to play along. I kept boxes of “dress up” clothes, but my brother preferred a hat rack—hats for every fantasy—railroad engineer, fireman, soldier, superman cape… As an adult, I stopped playing games, but I envied those who did not.

Some adults dress for Halloween, but I never did. Still, I admired the vintage baseball re-enactors at the Ohio Village, costumed tour guides in New Orleans, and Victorian Christmas carolers. Our dentist regaled me with stories of his Revolutionary War reenactment group. He chose to be a Tory Loyalist! When the 73rd Ohio OVI—a Civil War re-enactment group named after a regiment that one one of my husband’s ancestors fought in—came to town, I was sorely tempted.  But I’m no camp follower, and I couldn’t really see myself in a blue coat uniform. 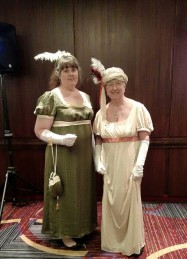 Then I began to attend writer’s conferences. I could hold out no longer. I mean, I spend so much time in the first half of the nineteenth century in my head scribbling stories, I may as well dress the part.

My friend Susan Gee Heino loaned me a dress for the Beau Monde soiree at the Romance Writers of American National Conference one year, and I was hooked.

The following year I asked her to make me a Regency dress and turban of my own. I took it with me to my first InD’Tale conference and met—gasp—cover models.

The Historical Romance Retreat presented a challenge. My Regency dress helped, and I own a flapper dress—suitable for speakeasy raids—but the grand ball was a challenge. A friend wisely chose to rent for that, but I limped along.

This year I’m going back armed with a new day dress and a knock-out green satin Regency ball gown with ostrich feathers on the turban, both made by the brilliant Victoria Vane. I’m ready! 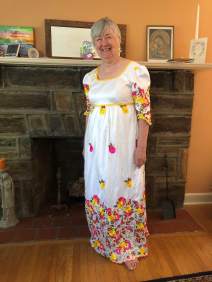 If we’re going to enter into fantasy, I say, we may as well go all the way.

Caroline Warfield is a writer of family-centered historical romance. Her two series for Soul Mate Publishing cover the late Regency and early Victorian periods and span the globe. She’s currently writing adventures for children of the first novel and is wandering down the Nile to Nubia with her hero. She prefers Regency dresses because she’s afraid she would find the wide skirts of the 1840s harder to sit down in!

You can find her here: https://www.carolinewarfield.com/

Traveler, adventurer, writer of historical romance. Enamored of owls, books, history, and beautiful gardens (but not the actual act of gardening).
View all posts by Caroline Warfield →
This entry was posted in Soul Mate Publishing. Bookmark the permalink.