Family Bonds Might Bend But Never Break, by Gail Ingis

I hope you are all doing well and keeping safe and healthy.

We have the same parents. My brother and I. He’s not a new person in my life, he’s my big brother. I didn’t know all the pieces and parts that Jay is made of, but I’m getting to know him now writing his memoirs—and there’s a lot to know. I love this crazy, amazing, dazzling new connection.

Our hobbies kept us connected. I had tropical fish in a thirty-gallon tank outfitted for cleanliness and prettiness. He got expensive exotic fish and bigger and better tanks. When Jay and his wife Barb went on vacation, he gave his housekeeper instructions on how to feed the fish. They came back from their travels and there were no fish in the tank.

He asked the housekeeper, “What happened?”

She said,  “I don’t know what happened, I fed them all day, but don’t worry, I have all the fish, they’re in the freezer.”

After choking on her answer, he explained if you feed tropical fish all day they’ll die. Fish keep eating anything you give them.

One day we had a disagreement and he didn’t talk to me for fifteen years. Devastated and not understanding what hurt him so deeply, I tried to apologize, but he kept away. I had lost my precious brother. After my granddaughter died and he came to the funeral, we talked and made up. We commiserated about Rebecca’s death, and he understood. He felt my loss and looped my arm through his. I leaned on his shoulder and wept.

Four years ago, Jay mentioned to me that he was working on his memoirs. He’d asked his niece, Judith Zissman, a talented and accomplished journalist, to help, and she agreed. But four years later Jay’s memoirs only had an outline. Then about six months ago, Jay asked me to work with him. He sent me the outline, and Judith sent me all the background research. She is a talented writer and now is working as my editor on this project.
I write the scenes/chapters and send them to Judith. She edits them and sends them back to me. After I tweak them, I send them to Jay. He does his share of writing. We’ve created a system for his memoirs that’s working well.

My former editor and friend Joanna had been encouraging me to write my memoirs. She’s always telling me what an exciting and inspiring life I’ve lived (still live). I began writing about my life and shared some of those funny childhood stories with Jay. But his memoirs took center stage. I put mine on hold.

I’m learning some of the technical stuff that he pioneered when working for NFL Films. He created first-time projects in electronics, frequency coordination, and coach to quarterback communications.

Here I am reminiscing, me at eighty-four and Jay at eighty-eight.  I’m not working on another historical romance, but there’s history in Jay’s memoirs. Once we get Jay’s finished, I hope to get back to mine.

In other news, I won first prize for my oil painting, Grasses in the Marsh, in the Madison Art Society (Madison, CT) member show. Use this link to find the show online (https://madisonartsocietyct.org). 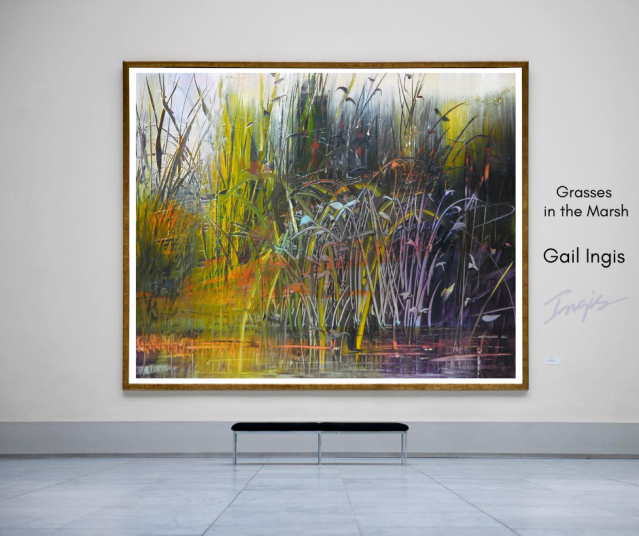 Remember my historical romances, Indigo Sky and The Unforgettable Miss Baldwin. You can download them for free if you have Kindle Unlimited.

No matter what your goals are — never give up your dreams.

This blog is a farewell as of October 15, 2020. It’s been a wonderful journey with a great group of authors in a wonderful publishing company. Thanks to Debby and Char. Thanks for always being there.
Hugs,
Gail

Gail Ingis a tough blonde from Brooklyn, writes history and romance. Gail’s early days began and ended with writing, drawing and music. After graduating from the New York School of Interior Design with a BFA in Interior Architecture and Design and Master’s studies in Architecture and Design Criticism at The New School (Parsons), she worked in interior design and architecture, and founded a school of Interior Design. She resides in Connecticut with her scientist-writer husband. Currently, she sits on Lockwood-Mathews Mansion Museum Board of Trustees, and serves as the curator of art exhibitions. Prior to her debut as an author, she illustrated a book for Deborah Galiley, "Seeking Paradise" that can be found on Amazon. Also a professional artist, her varied paintings are an extension of her illustration work in design. Gail spent long days and nights dallying in Coney Island, the inspiration for her project of beach and boardwalk scenes. She is a member of ASID (American Society of Interior Designers.)
View all posts by gailingis →
This entry was posted in Soul Mate Publishing, TGI-Gail!. Bookmark the permalink.

6 Responses to Family Bonds Might Bend But Never Break, by Gail Ingis