The Redemption of the Shrew, by Barbara Monajem 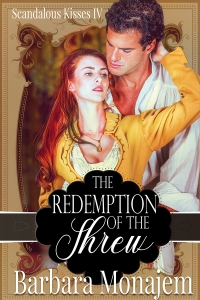 Nothing is more painful than rejection—particularly when completely naked.

Gloriana Warren doesn’t want to wait for marriage. Beneath her shrewish exterior is a kindhearted woman who uses her fortune for good. It doesn’t matter that the man she’s set her sights on claims impoverishment. She’s in love and determined to marry him. But her attempt at a moonlight seduction ends in disaster.

French marquis Philippe de Bellechasse has had it up to his gorgeous dark eyes with being pursued by lusty ladies. His escape to England from the violence of the French Revolution took a toll on his finances as well. Gloriana may be gloriously naked, but he’s just not ready to submit to her seduction.

But when a precious family artifact is stolen, Philippe must convince Gloriana he’s not the guilty party. He’ll steal it back for her, but on his terms. Gloriana, believing he despises her, has plans of her own. Working at odds is dangerous, but working together can be more so. Is Philippe willing to risk his heart again for a deliciously tempting shrew?