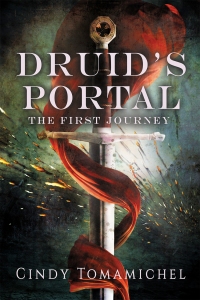 A love that crosses the centuries.

An ancient druid pendant shows archaeologist Janet visions of Roman soldier Trajan. The visions are of danger, death, and love – are they a promise or a curse?

Her fiancé Daman hurts and abandons her before the wedding, her beloved museum is ransacked, and a robed man vanishes before her eyes. Haunted by visions of a time she knows long gone, Janet teeters on the edge of a breakdown.

In the shadow of Hadrian’s Wall and 2,000 years back in time, Janet’s past and present collide. Daman has vowed to drive the invaders from the shores of Britain, and march his barbarian hordes to Rome. Trajan swears vengeance against the man who threatens both his loves – Janet and the Empire.

Time is running out for everyone.