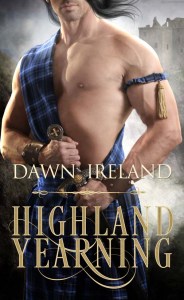 Caden is having a bad day. As the Laird of the Mackays he hates the Sutherlands with a passion matched only by his loyalty to his clan.  First he discovers his brother intends to marry a Sutherland. Then one of the deceitful clan appears, as if by magic, in his library. The captivating beauty is the enemy, but devil take it, she is unlike any woman he’s ever known, and her tantalizing curves and wide green eyes could tempt a monk. Caden knows he must devise a way to stop the wedding. But can he stop the desire that makes him long to make Ariel Sutherland his own?

Ariel’s life had never gone the way she’d hoped, but ending up in eighteenth century Scotland was a stretch, even for her. If not for her dog, Scruffy, she might have thought she’d walked into a romantic daydream. Especially since the object of her desire appears to be entirely too virile. But can she find her way back to her time, before her too-handsome Highlander makes her believe that love can conquer in any century?