A Heart Mended, by Jessie Salisbury 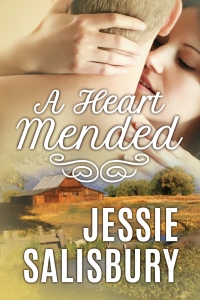 Wilfred has a broken heart. Betrayed years ago by his young wife and severed from his life work by a heart attack, he has retreated to a resident youth camp to hide and impart his love of nature to mostly uncaring campers. Too hurt to ever love again, too much in pain to care, he has retreated from the world to await his inevitable death.

But Shannon knows better. As the camp nurse, she understands his physical pain, and as she has learned to know, and deeply love, him, she has found the parts he keeps hidden. She knows he is a caring, gentle soul, a good man who could be healed, if he would let somebody help him, but he is rejecting her offered love.

Robbie is a sad reluctant camper. Left by his parents while they vacation, bullied by his bigger cabin-mates, he can’t swim, hates baseball but likes butterflies. His love of the outdoors catches Wilfred’s attention, but Robbie is the son of Wilfred’s ex-wife.

Robbie stands between Wilfred and Shannon, pulling them together and driving them apart, until Robbie is trapped in a burning barn with only Wilfred to get him out.