The Feria, by Julia Bade 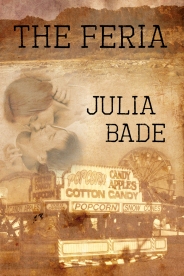 Opening in 1941, THE FERIA is a stunning tale of two countries, where we find Soledad, a smart, educated Mexican-American girl readying for Stanford. But when her father’s cherry empire suffers as a result of WWII, he forces her into marriage with Emmanuel, a wealthy banker meant to save the family’s agricultural empire.

Her father’s betrayal takes her far from school and from hopes and dreams of a happily ever after with her true love, a feria worker named Xavier.
One last goodbye with Xavier would have to be enough, but ends up gifting Soledad with a beautiful daughter, a secret lovechild she would raise with her husband Emmanuel for the next two decades… Until fate would use her very own daughter to intervene.