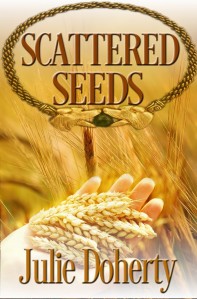 In 18th century Ireland, drought forces destitute Ulstermen Edward and Henry McConnell to assume false names and escape to the New World with the one valuable thing they still own–their ancestor’s gold torc.

Edward must leave love behind. Henry finds it in the foul belly of The Charming Hannah, only to lose it when an elusive trader purchases his sweetheart’s indenture.

With nothing but their broken hearts, a lame ox, and the torc they cannot sell without invoking a centuries-old curse, they head for the backcountry, where all hope rests upon getting their seed in the ground. Under constant threat of Indian attack, they endure crushing toil and hardship. By summer, they have wheat for their reward, and unexpected news of Henry’s lost love. They emerge from the wilderness and follow her trail to Philadelphia, unaware her cruel new master awaits them there, his heart set on obtaining the priceless torc they protect.