A Running Heart, by Kendra Vasquez 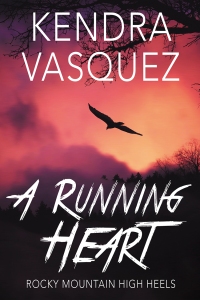 Romance . . .
Rebecca Hudson suspected it was more than a telemarketer’s phone call that kept her cousin, Amanda Hudson, from returning to their Denver apartment. When her doubts are confirmed, Rebecca dives into Amanda’s past. How did a fatal crash from years ago relate to Amanda being abducted now? Then Rebecca stumbles into Ryan Foster, the man who taught Amanda everything she knew about automotive. He may have his mind set on saving Amanda but his heart beats in a different direction. Rebecca’s body responds with equal intensity, and after one night with Ryan, she feels the need to run as much as Amanda.Revenge . . .
After a collision smothered his flower known as Danielle, Gersham Pearson, better known as Germ, rotted in the mountain town of Bayfield until one car repair leads him to sudden suspicion. Could Amanda Hudson be responsible for the crash that destroyed his life? Enraged, he plans to show her how he suffered, force her to feel what it was like to be in a car she couldn’t control. Unfortunately, after sabotaging Amanda’s Jeep, she isn’t the one who climbs into the driver seat but Rebecca. He’ll have to take a more hands-on approach to teaching Amanda a fatalistic driving lesson.Redemption . . .
Ryan Foster meant to distract 12-year-old Amanda from the memory and pain of her mother’s leaving. He gave her tools and put her to work, but the act of abandonment haunted her. In high school, bullies tormented her until an automobile accident took the life of one. Ryan thought he’d given Amanda the knowledge to cause such destruction. But now, holding a part he never knew existed and dealing with an overly invasive Germ, new clues emerge. They could prove Amanda innocent, and once shadows no longer lurk in his heart, he could pursue its truest desire.
All it should take is a phone call.