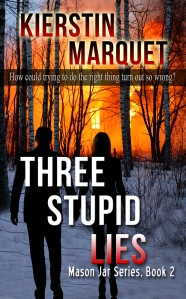 How could trying to do the right thing turn out so wrong?

In Three Reluctant Promises’ stunning sequel, Ashten Mason is determined to help her magazine-cover-handsome kidnapper. Tommy Ramirez might’ve risked his life to save hers, but lying to her police officer father and the FBI about their relationship turns out to be the stupidest thing Ashten has ever done. Now, the FBI think she’s his accomplice, the hit men see her as bait for Tommy, and her dad thinks she has Stockholm Syndrome. If her dad finds out her secrets—including how deep her feelings for the felon really are—Tommy might be safer seeking sanctuary with the hit men trying to kill him.

Staying alive is a minute-by-minute challenge Tommy is seconds away from losing. Not sure if a raging flood or hit men working for a powerful criminal syndicate will take him out, Tommy must dig deep to find the strength to survive. Crawling through hell to accomplish that and keeping the promises he made to a dying woman turns out to be easy compared to protecting the cop’s daughter he can’t get out of his mind.