The Order of the Senary, Book Two: Black Bullet, by L.D. Rose 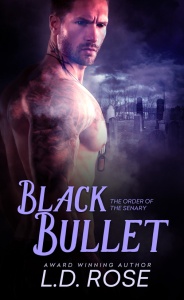 Not even his past life as a former marine and FBI agent could prepare him for the battle against the monster inside him, struggling to take hold. After an old nemesis of the Senary surfaces in Brooklyn, unleashing chaos and terror in the battered borough, Jon sets out to take him down. Instead, he ends up with far more than he bargained for when he clashes with the beautiful half-vampire hybrid, Lawan Knight.

After escaping near death and suffering unspeakable horror at the hands of vampires, Lawan trusts no one, regardless of species. In between bouts of drunken stupor, her only goal is to exterminate all those who’ve wronged her, including every member of Jon’s vampire bloodline. But Jon’s soulful eyes and quick smile crawls under her skin, transforming her black and white world into a hazy shade of gray.

As the days rapidly grow darker, Jon and Lawan turn to one another, but their inner demons threaten to tear them apart. The only way either of them will survive is if they overcome their greatest fear—love.