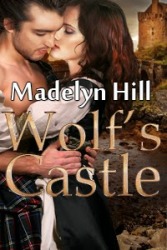 Vivian Stuart’s interests lie in a decidedly unladylike hobby. With her chemist father she has spent endless hours pouring over books about alchemy. After a storm lands her on an inhospitable island, Vivian finds life has taken a decidedly darker turn. She has lost everything dear—her father, her home, and her innocence.

Laird Galen Maclean has lived a life of neglect from his hateful parents. No matter how much he tried to please them, their loathing of each other affected him, even after their deaths. When Vivian’s boat crashes on his island, Galen treats her as if she were a troublesome child as the intrusion on his life thrusts him into the unfamiliar role of a gentleman.

Galen’s disdain of her is obvious. Despite this, she is drawn to the brooding, handsome man and his interest in alchemy. Vivian and Galen strike a tenuous trust to solve the alchemy experiment that killed his father.

Evil forces attempt to thwart the growing attraction between Galen and Vivian in order to gain what they desire most—power wrought by alchemy.

Galen and Vivian’s love must triumph over the evil forces that desire their demise in order to have a future paved in gold.