Away, Book One of The Folk Trilogy, by Meg Benjamin 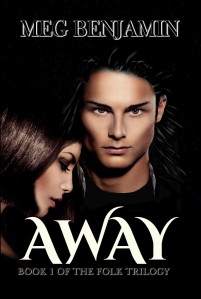 Grim Morrigan, Guardian of the Ward, is charged with keeping track of the Folk, the various clans of fairies who live in the foothills outside Denver. But his main job is keeping the Folk from being discovered by the mortal community.

Enter mortal Annie Duran, who hires him to look for her brother Richard, missing and presumed dead for ten years. But Annie has seen Richard in the parking lot of a nightclub where she works. The quest for Richard throws both Grim and Annie into danger as  they become caught in a sinister conspiracy involving kidnapped women and outlaw magic. But it also brings them closer together as they discover their own overwhelming attraction.

Grim’s search for answers becomes even more urgent when Annie herself disappears, possibly at the hands of a renegade faction of the Folk. With the help of a dissolute prince and a motley crew of unlikely fairies, Grim confronts the rebellion.

But it may take more than just magic and luck to save both Annie and Grim this time.