Unseen, Book Two of the Folk Trilogy, by Meg Benjamin 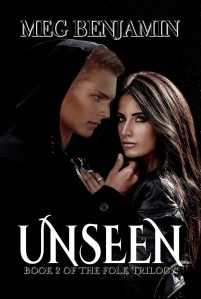 A routine job, but then it turned deadly.

Teran Richter is in Animas, Colorado, to find members of the Folk, a simple task. But the annual Animas Fall Festival brings hordes of tourists and daily celebrations that make it frustrating. Things begin to look up when Teran meets Marika Sager. Marika’s business partner Eva seems to be a member of the Folk, only it’s Marika Teran’s attracted to, particularly after a local witch’s brew sends the two into a memorable night of passion.

But there are sinister forces at work in Animas. Teran’s attacked and his assistant is kidnapped. When Marika also disappears, Teran’s forced to confront the truth: someone is out to sabotage his mission and destroy anyone who tries to help. With an eccentric team of magical allies, Teran must rescue Marika and fight off those who want to destroy both him and the Folk. But can he find a way to confront the shadowy forces while keeping himself and his lover safe from harm?