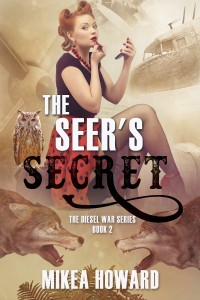 Born with a special gift, Molly could help others but existed between two worlds—undetectable by one and not fully part of the other. Usually choosing not to interfere in other folks lives, she never employed her abilities to their greatest potential. When the leader of the Animal Gang learns the truth of her skills, Molly’s simple life as a baker in her family’s shop is threatened. Could the Blue Wolf enforcer she’d been pining over help her escape and embrace her gifts . . . or is she just putting his life in danger?

Edo’s entire life had been one exception after another, never the norm on any path his life leads him. Using an ability he sees as mundane, he meets the beautiful baker while on a mission for his alpha. As she is hunted by the rogue gang she entrusts her secrets and her heart to him. But can he protect her in the diesel city and still serve his alpha and pack?