THE TRAIL TO LOVE, by Tina Susedik 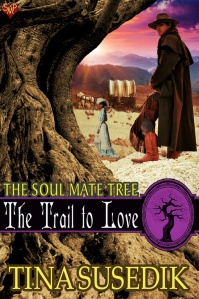 When his wife and baby die in childbirth, Jack Billabard vows to never to love again and chance losing another woman. After their funeral at Fort Laramie, he rides into the Wyoming hills beyond the ranch he built for his wife. Through his grieving tears, an ancient tree appears, giving him the hope he doesn’t believe is possible. For the next four years, he acts as a guide on the Oregon Trail, taking families to a new life while his looms lonely and stagnant.

The night before her abusive husband’s death, an ancient tree appears in Sarah Nickelson’s yard as she agonizes over how to survive her marriage. The tree gives her hope she can’t help but reject. After all, a tree doesn’t just appear out of nowhere. After her husband ‘s passing, his doting parents decide she must go to Oregon City to marry her brother-in-law.

During their trek west on the Oregon Trail, Jack and Sarah encounter one another, each afraid to be hurt by another person. Can they survive dogs and puppies, wind and rain storms, Indians and unfavorable fellow passengers while their love blossoms? Will the tree fulfill its promise?