To Kiss a Rake, by Barbara Monajem 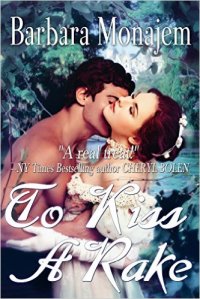 WHEN A LADY IS ABDUCTED BY MISTAKE…

Melinda Starling doesn’t let ladylike behavior get in the way of true love. She’s secretly helping with an elopement, when she’s tossed into the waiting coach and driven away by a notorious rake.

Miles Warren, Lord Garrison, comes from a family of libertines, and he’s the worst of them all—or so society believes. When Miles helps a friend to run away with an heiress, it’s an entertaining way to revenge himself on one of the gossips who slandered him.

Except that he drives off with the wrong woman…and as if that wasn’t scandalous enough, he can’t resist stealing a kiss.