The Savage From The Sea, by Claire Harris 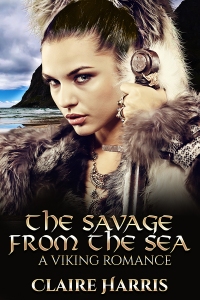 The pagan Vikings are pillaging the shores of England, stealing and striking fear in the hearts of the people. Fighting alongside the men, Finna Vidisdóttir is all too happy to participate in their destruction until a near fatal defeat lands her in the hands of the enemy.

Colby de Beaufou is the man responsible for her downfall and soon finds himself her reluctant captor. Deciding to barter her back to her people for peace, he is all too ready to be rid of his hostile captive.

Thrown together by battle, a deep, heated passion ignites between them. Torn between love and loyalty, Finna must make the ultimate choice; surrender her heart to the enemy and turn her back on her people, or return to her homeland.