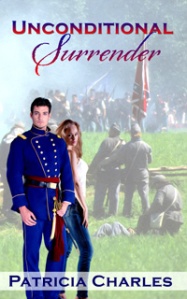 Nothing could drag Kristen McConnell back to re-enacting. Nothing, except the wedding of her best friend. Maybe Creed Graham wouldn’t attend the 150th Battle of the Wilderness. Maybe she wouldn’t see him even if he was.

When Creed discovered Civil War Re-enacting, he knew it held everything he loved: history, horses, sleeping under the stars, guys drinking beer by the campfire. There was nothing better. Then he met Kirsten McConnell. And she ruined everything for him.

The Wilderness held his salvation. He knew she would return after three long years. This time he would erase her from his heart for good.

While the Battle of the Wilderness rages in explosions of cannon fire, Kirsten can no longer avoid Creed. Will they continue their war or will there be an Unconditional Surrender?