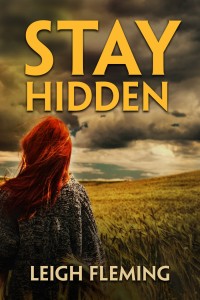 Riley Smith has something her abusive ex-boyfriend thinks belongs to him. Her. If she doesn’t keep moving, he’ll beat her all the way back to the life she ran away from two years ago. But the picturesque town of Highland Springs, West Virginia, has started to feel like home. She’s gotten a good job. Made a few friends. Ones who don’t know the Riley she once was.

FBI agent Derek Bronson is hunting the man who killed his father in a bank robbery spree, although his week of passion with Riley Smith is sure as hell making it hard to concentrate. Until a convenience store surveillance photo identifies her as an accomplice.

Riley’s only option is to help flush out the men behind the crime, exposing a past she had hoped would Stay Hidden. But the situation is far worse than she ever dreamed.

Now she and Derek must fight to stay alive.